What is really happening when you punish a behavior out of your dog? 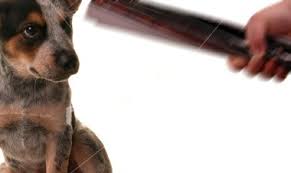 All to often I have people tell me things such as, “He used to growl at me, but I broke him of that really quickly” or “She used to jump on people, but now all I have to do is show her the newspaper and she will stand quietly”. That’s great, maybe, but what have you really taught your dog? Maybe he thinks growling isn’t allowed, even though growling is a signal animals use instinctively to signal they are uncomfortable or want more space… So, how is he supposed to tell you he is uncomfortable with a situation if he’s not allowed to growl? Showing teeth or snapping at you? Which one seems worse now?
Maybe she thinks if she doesn’t move at all mom wont smack her with the newspaper, and mom thought it meant stop jumping. Sometimes what we think the words “stop” or “no” mean, really mean something else to them. It can simply be all in your timing. You may have intended for the presentation of the newspaper to mean no jumping, but the dog could have thought that when they stood still mom stopped smacking them. Yes, it may have stopped the undesirable behavior, but what if someone where to approach the frozen dog and cause her to have to move? What if she thought she was going to get in trouble for moving and snapped at the person so as to say, “Hey! don’t make me move. Mama gets mad when I move at the door”. Now what kind of trouble is the dog in? And who’s fault is it really?
Most likely it is no one’s fault. It was just a product of miscommunication. People watch trainers on TV, or remember how the dogs were treated years ago on the farm and think this is the way to train. “You have to be the Alpha”. THIS IS NOT TRUE! TRAINING IS THE KEY TO A DOG THAT LISTENS TO YOU…THAT’S THE BIG SECRET.
There have been many times that I have showed up somewhere in my truck, that clearly states that I am a dog trainer, and a person’s demeanor changes immediately after they see me. They were enjoying the sled pull around the block, with minimal annoyance toward the fact that their hand was loosing circulation from the tight leash, and bam! The owner stops the dog and tells it to sit ten times, then gets embarrassed because the dog is clearly “not listening to them”. Then comes some sort of punishment. It could be getting yelled at, being dragged back home, or I even had one lady smack the dog with her flexi-lead….That’s a whole…nother…blog entry. Lol
The bottom line is when we punish our dogs and don’t let them know what they are doing that is good, they often focus on the timing of the punishment and don’t understand what to do instead of the undesirable behavior. They just do nothing or avoid looking. That may make the behavior stop, but it often times causes fallout such as snapping, biting, or worse. This behavior of doing nothing to keep out of trouble is a term we call learned helplessness. They don’t understand what they did wrong, so they just stand still and wait to see what someone is going to do next. If they aren’t noticed, maybe dad wont get stressed out… The fallout that often occurs, is just their way of trying to communicate without the signal you did not like the first time they told you.
So, if this isn’t the most effective way of training, what is? What if we switched things around and made things a little less stressful? Jumping at the door is annoying. What would you rather your dog do? Wait until it is okay to greet someone? Maybe keep their feet on the floor when they greet them? Okay, so let’s teach them those behaviors get them goodies or praise from mom and dad. Many times it as simple as ignoring the bad behavior (being wild and jumping), waiting until they offer the good behavior (a sit or at least no vibrating), and then rewarding them for finding the right thing to do. “Yeah! If I sit and be calm, mom lets people come and say hi to me. If I jump and be wild she will just stand there boring and not let the person in the door”. How cool is that? We just turned a stress filled situation into a relaxed situation with tons of treats and praise! And… think about the human body language in this picture. Wouldn’t you rather be the person that is happy to introduce their dog to people instead of the person armed with the fly-swatter at the front door when the UPS guy shows up? Positive training is standing the test of time, and the days of using the training style of being the “Alpha” or “Pack Leader” are going by the way side. Be open to learning new ways, after all we are the ones that domesticated these animals…Shouldn’t we be responsible for them enjoying their all to short stay with us? 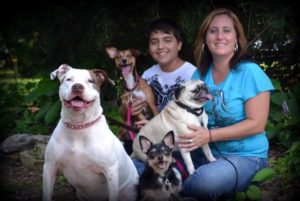